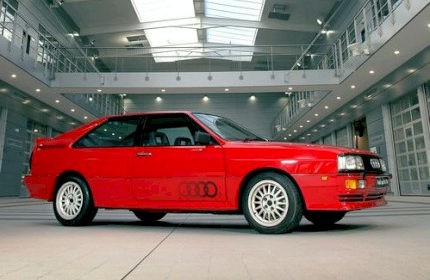 Ashes to Ashes is a British science fiction and police procedural drama television series, serving as the sequel to Life on Mars.The series began airing on BBC One in February 2008. A second series began broadcasting in April 2009. A third and final series was broadcast from 2 April to 21 May 2010 on BBC One and BBC HD

DI Alex Drake: [Gene has just solved the case] Oh, I could kiss you!
DCI Gene Hunt: Don’t hold back.

The Audi Quattro is a road and rally car, produced by the German automobile manufacturer Audi, now part of the Volkswagen Group. It was first shown at the 1980 Geneva Motor Show on 3 March. Production of the original version continued through 1991.The word quattro is derived from the Italian word for ‘four’. The name has also been used by Audi to refer to the quattro four-wheel-drive system, or any four-wheel-drive version of an Audi model. The original Quattro model is also commonly referred to as the Ur-Quattro – the ‘Ur-‘ (German for ‘primordial’, ‘original’, or ‘first of its kind’) is an augmentative prefix, in this case meaning ‘original’, and is also applied to the first generation Audi S4 and Audi S6 models, as in ‘Ur-S4’ and ‘Ur-S6’.

The series tells the story of Alex Drake (played by Keeley Hawes), a policewoman in service with the London Metropolitan Police, who is shot in 2008 by a man called Arthur Layton, and inexplicably regains consciousness in 1981.

2 mini-episode Specials were made for charity. The first one for Children in Need 2008, set in 1981, was a 3 minute crossover with “Top Gear”, which was running in 1981, under its original 30 minute format, but featured Richard Hammond from the re-booted 1 hour format version. The second Special produced for BBC Sport Relief Night 2010, set in 1983, featured various personalities famous at that earlier time, in a golf related plot. Its unclear if anything was made in 2009 for Charity. Both Specials can be found online. Additionally, they *could* be considered as part of the main story arc, if they are thought of as maybe two bonus “weird dreams” episodes, that we often saw Drake waking from in the proper series.

The typeface used in the end credits are from a Commodore PET computer, which is also the same computer that is on DCI Hunt (Philip Glenister)’s desk.

The Audi Quattro used by Gene Hunt was not available for sale in the UK in 1981. He would have had to order it from continental Europe, thus it would probably be left-hand drive. This is acknowledged to in the extras, which speculate that Hunt could have gotten the car as “a dodgy import.”

Scroll Down for More

Which of the following songs was NOT on The Ashes to Ashes Soundtrack ?

A. ‘Vienna’ by Ultravox
B. ‘Ballroom Blitz’ by The Sweet
C. ‘Fade to Grey’ by Visage
D. ‘No More Heroes’ by The Stranglers

B. ‘Ballroom Blitz’ by The Sweet

Scroll Down for More

The Commodore PET was a line of home/personal computers produced starting in 1977 by Commodore International.[3] The system combined a MOS 6502 microprocessor, Commodore BASIC in read only memory (ROM), a keyboard, a computer monitor and (in early models) a cassette deck for data and program storage in a single all-in-one case.
The original PET design underwent a series of significant updates, adding more memory, a better keyboard, larger screens and other modifications. The systems were a top-seller in the Canadian and United States educational markets, as well as European business uses. The PET formed the basis for Commodore’s entire 8-bit product line, including the Commodore 64.

Which of the following songs was NOT on The Ashes to Ashes Soundtrack ?

A. ‘Vienna’ by Ultravox
B. ‘Ballroom Blitz’ by The Sweet
C. ‘Fade to Grey’ by Visage
D. ‘No More Heroes’ by The Stranglers

‘Ballroom Blitz’ was released in 1973, and featured in the ‘Life On Mars’ series. The other songs were all released in the early eighties and were in the Charts at the time in which ‘Ashes to Ashes’ is set, and provided great music for the escapades of Drake, Hunt and co
With every great TV series comes a great soundtrack, and ‘Ashes to Ashes’ is no exception! Popular songs of the era are heard in every episode.

Famous Cars from TV, Film ( www.gadgetshowprizes.co.uk ) is unofficial and for information only. It is in no way linked to any official companies. All Amazon Links are linked directly to an official Amazon associates affiliated website ( www.amazon.co.uk )

IMBCd, Wilkipedia, IMdb, and Video from YouTube . Make ,Model and Year are for Reference ONLY and may not match the Movie Date, Cars are in No Particular Order